Last week the No Limit: Artscape Edition Borås 2020 was arranged in collaboration with Artscape. A total of 12 art pieces were created and they can now be viewed in the Norrby neighborhood in Borås, Sweden. This was the fourth edition of No Limit Street Art festival.

Elina Metso. With a background in game development and illustrations, Elina Metso has experience of many different materials and styles, which is reflected in her artwork. She prefers to paint colourful portraits, often of female or androgynous characters.

Delicious Brains. Delicious Brains, or Kim Demåne, is a multifaceted artist doing both exhibitions, murals, album and magazine covers and music videos. He has a playful and colourful style with a lot of details and has previously made art work for the worldwide conference TEDGlobal. 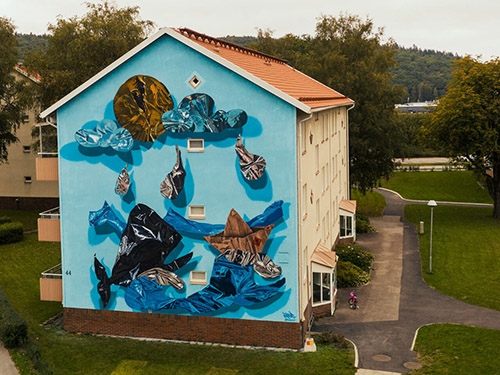 Huge. Huge started painting graffiti in the mid ‘80s and has created murals all over the world, from Stockholm and Paris to Los Angeles and Shenzhen. He’s mainly known for his own unique style known as “Helium Graff” – hyper-realistic balloon letters.