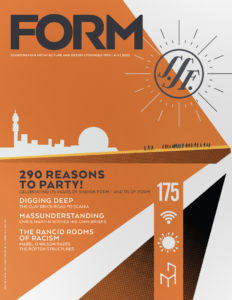 This year,  Form Magazine celebrates 115 years of uninterrupted publication. It was in 1905 that the first issue of “Svenska Slöjdföreningens Tidskrift” was published. In 1932, the magazine got a completely new format, new typography and a new name: Form Magazine. Form’s parent organization, Svensk Form, is also celebrating this year – the association turns 175 years old. This anniversary issue dives deep into the joint history of the magazine and the association.

Editor-in-chief Bo Madestrand loses himself in over a century worth of magazine history and Kerstin Wickman pays tribute to a unique association whose history is as hectic as it is impressive.

But the anniversary issue is not only nostalgic – it also contains a lot of foresight, such as the interview with curator Mabel O Wilson, who has created an exhibition at MoMa in New York about contemporary African-American architecture, and designer Chris Martin, who is this year’s Bruno Mathsson Award winner.

In the report Digging Deep ceramicists Gunilla Svensson and Pernilla Norrman use the local clay to make softly grooved tiles in warm shades of red.